The Ramen Museum in Shin-Yokohama features lots of vegetarian / vegan Ramen.
You can check out their website (English) for a list: http://www.raumen.co.jp/english/#manual
When we went, the entrance fee to the museum was 310Yen. Basically the museum's interior looks like Japan in the Showa period. It is not so much a museum though, but more a place to eat.
Several famous Ramen shops from all over the country are present. The shops frequently change, but they always have vegan options.
We had veggie Ramen at "Narumi Ippudo" and at "Komurasaki". Narumi Ippudo's ramen had a very light broth. At Komurasaki we took a "Compare veggie with non-veggie set" for 1,240Yen with a bowl of both versions. If you have someone eating meat with you, this is definitely recommendable. Then there was "Muku Zweite" a shop that originated in Germany and came to Japan later. The veggie Ramen are miso based and really good.

Posted by vegetablian at 12:53 AM No comments:

Email ThisBlogThis!Share to TwitterShare to FacebookShare to Pinterest
Labels: Yokohama

Close to my favortite live house in Shibuya a friend took me to a kebab place, called 'Cleopatra Kebab'. They serve delicious falafel for 500¥. Fortunately it is open until late at night (or rather early morning, I only saw it closed once because of a holiday), so it is the perfect place to drop by when you are out in Shibuya at night and search for something vegetarian to eat, which really can turn out tricky between all the meaty ramen places....

P.S. The falafel itself is vegan, too. You should check about the sauce though. But I am sure it also tastes good if you need to leave out the sauce!

P.P.S. When you are around in that area anyway, you should check out the lovely bar/live house called 'Ruby Room'. I especially recommend tuesday nights, but you will surely have a great time any other night, too! :) 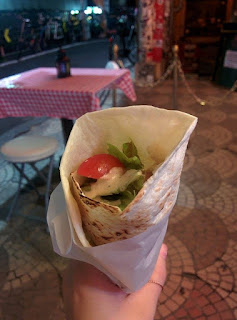 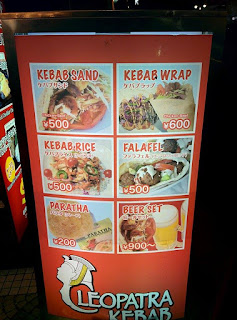 Posted by M Vegetablian at 10:11 AM No comments:

Promote your Page too